We’ve worked with Riegl and InfraTec to integrate an InfraTec VarioCAM HD with Riegl TLS scanners. To date, this integration is not complete; we can take pictures with an InfraTec camera on top of a Riegl scanner, and we have developed a calibration for the camera and the mounting, but full software integration is still in the future. Even with incomplete integration, we brought a Riegl scanner and a InfraTec camera to the South Pole in January of 2017 to perform a three-dimensional survey of infrastructure with integrated thermal information. 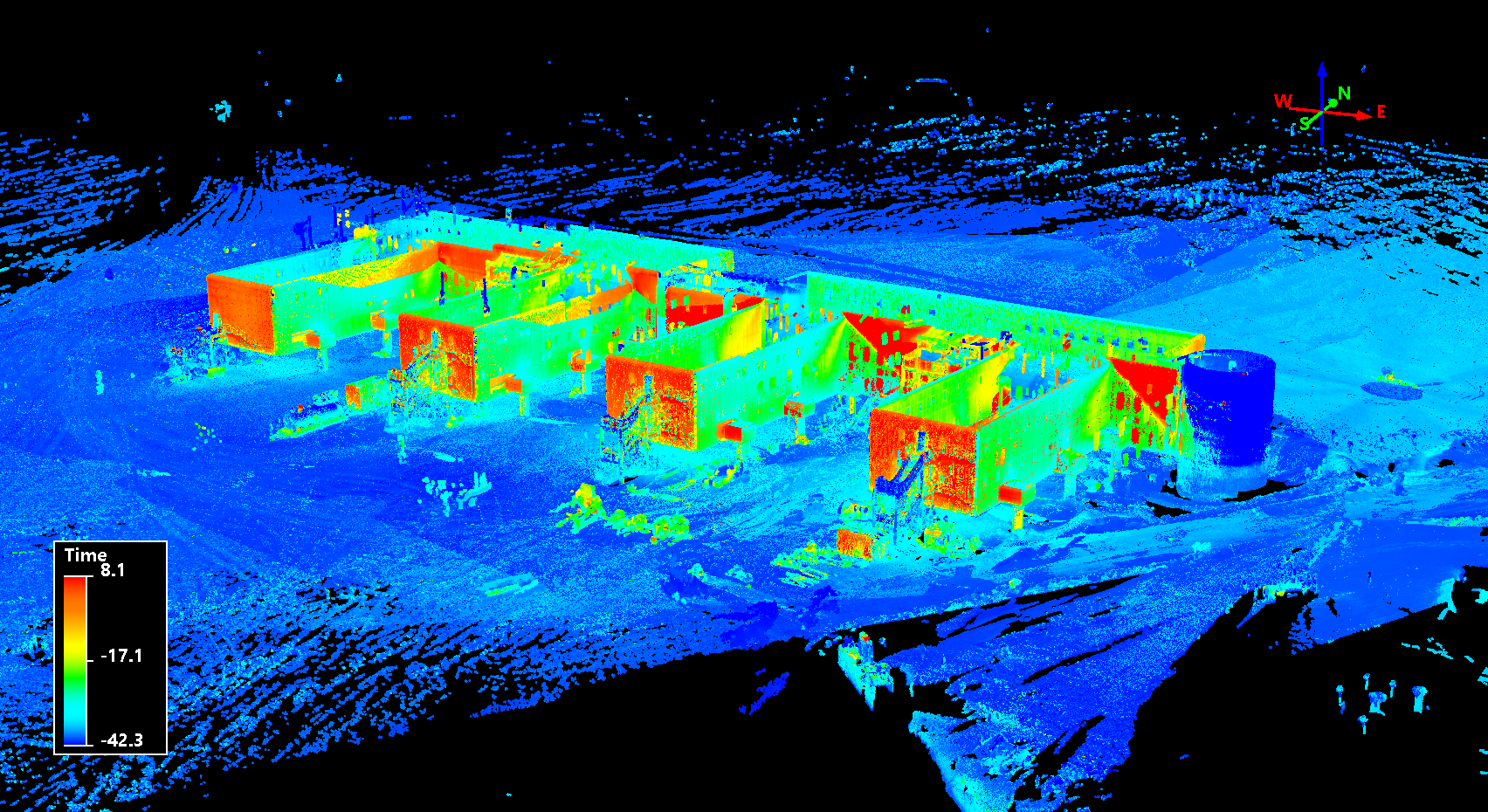 This is an overview picture of the resultant data. The legend is incorrect, the colorization is in degrees Celsius; I’ll explain why that’s “time” later in this post.

This post walks through the procedures and the software used to do the integration.

The TLS data were collected in 23 individual scan positions throughout the facility.

Each scan position included between five and nine thermal images, captured from a camera mounted on top of the TLS scanner. The heavy lifting of registering and QC-ing all of these scans was done by my colleague Adam. He also used InfraTec’s software to convert each thermal image (in the irb format, discussed later) to a simple colormap jpg, and imported these colormaps into Riegl. This ensured that each thermal image had an associated image record in the RiSCAN Pro project1.

Each thermal image also has an associated Camera’s Own Position (COP) matrix, which changes with each picture because the scanner head rotates for each new image. The camera mounting also has its own transformation matrix that represents the camera’s position with relation to the scanner origin, known as the mounting matrix (MM). Together, the mounting matrix and the COP matrix can bring a point from SOCS to the CaMera’s Coordinate System (CMCS).

In order to convert points from the CMCS to actual image pixels, certain properties of the camera itself must be known or discovered. We’ve developed a camera calibration for our InfraTec VarioCAM HD, and this calibration is contained inside of the RiSCAN Pro project. The math underlying this calibration is beyond me, but it is laid out exactly in the Riegl project documentation, so I simply tranferred it over to my Rust library.

The camera calibration converts three-dimensional CMCS points to a two-dimensional pixel. This math isn’t perfect — it can produce “valid” pixel values for points that are, e.g., behind the camera. My library does some additional filtering to ensure that each CMCS point maps to a valid pixel value or None.

We now have all the math we need to:

Now we just need to read our data.

Our point clouds are stored as rxp files, which is the proprietary file format from Riegl. Thankfully, they provide RiVLib2, which provides a library for reading rxp data. I made a FFI wrapper around their library and a helper library in the Rust workspace rivlib-rs, which I use to read rxp points into Rust.

A similar situation presents itself with the thermal data. InfraTec’s irb format is closed and proprietary, but they also provide a library3 for reading irb files. Again, I wrote a FFI wrapper and helper library4, this time named irbacs-sys and irb-rs respectively.

The pieces are now all set up. To review, these are the individual rust crates we have so far:

Each one of these crates stands more-or-less on its own, and could be used in other projects. Everything from here on out will be pretty us-specific, so it probably belongs in its own crate: the Thermal Colorization Engine, or tce.

The basic mechanics are pretty simple:

The las format doesn’t do custom attributes well. The extra bytes mechanism does exist for las 1.4, but it’s not universally supported5. The GpsTime field is convenient for us, since it’s (a) a double field and (b) pretty useless for our TLS data. So we shove the temperature value into there.

My las-rs library doesn’t support compressed output or coordinate reference system information, so we use PDAL to do a bit of post-processing.

It took a decent amount of work, but we now have an engine that can be used to colorize Riegl-collected TLS data with InfraTec thermal imagery. I won’t be sad when Riegl does this integration themselves, but until then, this’ll do.

2017-10-24: I’ve put the commented source of the Thermal Colorization Engine up here, if you’re curious how it all works.